The EU funds this pilot project within the framework of the "Life+"-Programms with more than 2 million Euro.

Central target of the project is the industrial demonstration of a new approach to finding and using the full potential of energy contained in wastewater and sludge in municipal wastewater treatment plants.

For the first time, we intend to implement a fully self-sufficient sludge treatment (digestion, drying, gasification). Based on this we used the example of the Koblenz Wastewater Treatment Plant to show that the amount of sludge generated in a large wastewater treatment plant can be reduced by 85 % without using supplemental energy of external suppliers and that additional energy obtained at optimal handling of the system can be used to supply other facilities with energy.

SusTreat allows a drying and gasification process without the supply of additional, external energy. At the same time the CO2 emission decreases by 25 %.

Construction of a heat exchanger for recovering heat from the digested sludge for preheating of the raw sludge; a heat recovery of 1,500 MWh per year is expected from this. The transmission losses were determined as being approximately 1,000 MWh/year. The cost of the renewal of the digester's thermal insulation can thus be overcompensated by this. Due to the high heat recovery rate from the dryer that became apparent during the course of the project, heat recovery from the sludge can be dispensed with for the meantime.

In addition, a primary sedimentation plant to increase the flow of energy-rich primary sludge is planned. This measure will provide for the most low-energy removal of carbon compounds, which are not required for denitrification, from the wastewater.

After the special restrictions of the development freeze for the sewage sludge gasification plant and the drying plant had been lifted in May 2011, the special regulations for the development plan in preparation valid for the surroundings of the wastewater treatment plant have been as well declared inadmissible in January 2012. As a result of this, there are no more general emission limitations opposed to the installation of the sewage sludge gasification plant, sewage sludge drying plant, the operation of the block heat and power plant with synthesis gas and sewage gas as well as the transport of sewage sludge pellets, sewage sludge ash and dust.

The approval documents for the drying of sewage sludge, the recovery of energy obtained from sewage sludge and the operation of a CHP (combined heat and power plant) with sewage gas, synthesis gas and natural gas have been elaborated based on the updated planning and submitted to the approving authority SGD-Nord on 12th June 2012. The approval to construct and operate the plant has been granted subject to conditions on 25th September 2012.

In order to use the energy contained in the sludge, it needs to be dried first. The Koblenz Municipal Drainage Board invited for a tender within the EU for the construction and delivery of a sewage sludge dryer. On 28th May 2013 the order was exchanged in the framework of an initial conversation between the commercial plant manager of the municipal undertaking of the Koblenz Municipal Drainage Board, Mr. Bernhard Mohrs and Mr. Peter Pfeiffer of the company Klein Technical Solutions GmbH in Niederfischbach (see picture).

Integration in a process control system

Integration in a process control system, which regulates the interaction between the modules with the target to optimise energy efficiency and energy distribution in a smart and au-tonomous way.

Maximisation of own power generation

Maximisation of own power generation through the motor utilisation of digester gas and synthesis gas. In addition, the energy of the sun is also made useable. For this purpose, a photovoltaic system with an output of 108 kWp has been installed in the meantime.

By using targeted trickling, the BOD load of the activated sludge falls from a population equivalent (PE) of 189,000 to 164,000 and the nitrifying load from a PE of 196,000 to 178,000. In an unregulated trickling operation, one would expect a much lower effect in a significantly more unstable activated sludge plant. The measure aims at increasing the capacity of the treatment plant. In addition, the treatment plant has to purify the sewage from a new industrial plant, which, at near capacity operation, amounts to about 250,000 cubic metres and a COD value of 1000 mg/l (with no deductible substances). Another substantial discharger (waste paper) has further increased its discharge levels. Alternatively, should an increase in tank volumes for the activated sludge be required, it can also be assumed that this would lead to an increase in electricity demand.

Significant energy savings have been found through the targeted re-commissioning of the existing high-load trickling filter system, the management of energy use by treatment of the filtrate water in off-peak periods, the improved aeration by the nitrification cascades and the recommissioning of three smaller bypass pumps. Only in the case of rain, is it necessary to pump most of the pre-clarified wastewater into the holding tank before the trickling filter and then to route it past the trickling filters directly into the aeration basin. The savings amounted to 200,000 kWh in the last 12 months, between the activation tank aeration and the intermediate pumping station.

2) Managing energy use by treatment of the filtrate water in off-peak periods.

At three pre-settable times, predetermined amounts of the filtrate water are fed into the activation stage.

While in the past, the feeding-in was started as early as 16.00 hours, now the feeding-in does not start until approximately 23.00 hours and does not reach its maximum before 01.00 hours. This leads to better homogenization of the nitrogen load, better utilization of the turbo compressor power during the night and a lesser increase in oxygen in the individual cascades. Ammonium peaks in dry weather at the maximum load reached at about 14.00 hours are lower.

The maximum quantity of filtrate water that can be added should be able to be increased by suitable measures. In this way, further improvements are expected (e.g. utilization of turbo power in the off-peak 4-8 am period).

3) Optimized aeration by the nitrification cascades

The aeration adjustment controls have been further developed. For each individual cascade, individual oxygen concentrations can be specified. While, in the past, operating levels of oxygen were at 1.5 mg/l, now the first cascades operate at 0.6-1 mg/l and the following cascades at 1.3 to 1.4 mg/l. Ammonium regulation works by raising the oxygen levels, if ammonium exceeds a predetermined value. In the past, the increase was made at 2 to 2.5 mg/l. Now the increase point is reached at 1.7 mg/l.

The improved adjustment system makes it possible to recommission the small bypass pumps. Instead of 0.06 KW/cubic metre, these need only 0.03 KW/cubic metre at a total output from the trickling filter operation of about 200 l/s, as they are not outputting into the manifold but directly into the bypass line. In a fourteen-hour trickling operation, this means that in dry weather 10,000 cubic metres can be output daily into the activated sludge at half the pumping cost.

5) Refurbishing of the aerator plates for the activation stage, including the associated small turbo blowers for off-peak periods.

This measure is still pending. A student from the Fachhochschule of Koblenz (Koblenz University of Applied Sciences) wrote a final dissertation about this energy saving. A saving of 20% in the electricity used for the aeration process appears realistic.

6) Reduction of the sludge return rate in dry weather operation

The improved adjustment facility allows the return sludge quantity in activation stages 2 and 3 to be controlled in relation to the sludge level. In this way, the return sludge quantity during dry weather decreased from 120 l/s to 85 l/s. As a result, power consumption drops by 6 KW per hour during dry weather. A first trial of adjusting the sludge return rate was carried out. Where the adjustment can be carried out, it can be assumed that one can operate with one of the three, instead of two of the three, return sludge pumps. Due to the increased density of the return sludge, there is also the expectation of energy savings for the excess sludge centrifuges and for the input of polymer.

7) Use of the water level difference between pre-treatment and activation stage 1 for direct gravity feed of this flow.

With a new interconnector, BB1 will be supplied in the future directly via a flow meter and a throttle slide. This will use the potential energy of the wastewater in the most effective way. The resulting saving in electricity is about 20% higher than the expected electricity production from the hydroelectric plant.

This measure is currently at the planning stage

This was partly achieved through the re-commissioning of the small bypass pumps. After point 7 is carried out, reconfiguration measures can be planned here. Energy savings can be expected here, particularly in rainy weather, but to a lesser extent also in dry weather. (0.03 KW / hour for each cubic metre of wastewater that, with a sufficiently large bypass line, is not fed through the distributor).

In the third quarter, electricity consumption was about 2% higher than in the fourth quarter. It is assumed that the pre-precipitation reduces the power requirements of the wastewater treatment plant to a small extent. One can also assume a small reduction in the required amount of precipitant. By reducing the precipitate sludge in the activation stage, one may expect an increase in capacity of the treatment plant.

The aforementioned measures mean, according to current calculations and intermediate results, that the Koblenz Wallersheim Wastewater Treatment Works will use about 0 MWh of heat per year (previously 130 MWh/year) and approximately 1,270 MWh of electricity from the grid (1,940 MWh/year). Compared to the previous operation, this represents a reduction in electricity purchases of 35%! Furthermore, the transport of sludge will be reduced from the previous 11,500 tons per year to around 1,700 t/year and thus make a significant contribution to the prevention of CO2 emissions and the reduction of transport volumes (traffic). It is thus possible to achieve the project objectives. Under favourable circumstances, the savings may even be greater than the potential set out there, so that future energy consumption could be more favourable than that calculated before the overall measures were undertaken.

Combining energy self-sufficiency with sludge minimization - how is that possible?

Individual modular solutions - which make best use of the existing internal energy flows - are combined intelligently. The CO2-neutral energy sources of sludge and digester gas are available at the Wastewater Treatment Works, but have not yet been fully put to use. The warmth in the effluent, (waste) waterpower and the sun are also potential sources of emission-free energy production. SusTreat represents a complex system solution that makes this energy potential available as a package. 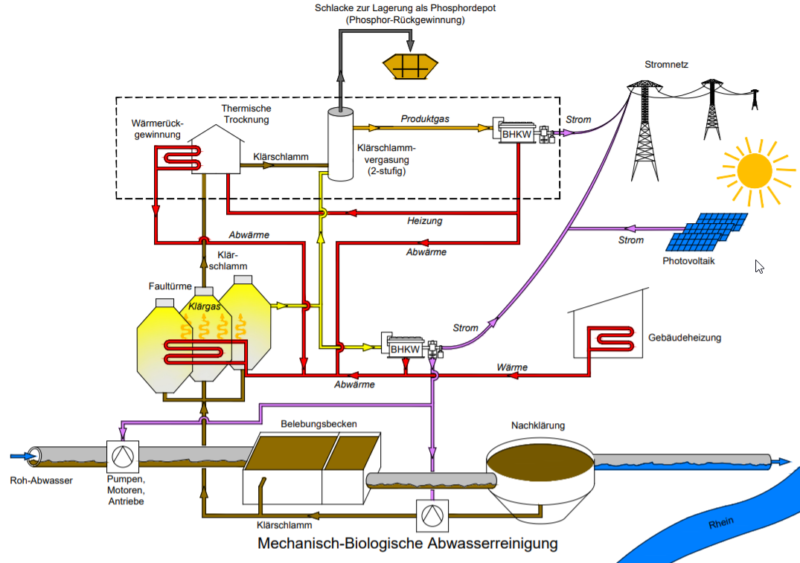